Fantasy Tactics is a small prototype of an isometric "tactics" game I've been building for https://itch.io/jam/lowrezjam-2020

In Fantasy Tactics two sides, THE KINGDOM and THE UNDEAD batlle.  Each side's goal is to eliminate all the units on the opposing side.

Units have the following attributes:

A unit dies when it's HIT POINTS reach 0.  Units that can cast SPELLS need MAGIC POINTS (1 point per spell).  Also some units will be carrying POTIONS to heal themselves (+3 HIT POINTS)

The game is played in alternating TURNS for each side.  On each TURN every unit can MOVE and then TAKE AN ACTION.   Move to a unit that has not finished it's turn and press X to activate it.  This will bring it's MOVE AREA (in RED) to show where it can move in this turn.  Move freely inside the MOVE AREA with the cursor keys and note that units cannot go through other units, rocks or trees, cannot wade through water (but can jump across 1 water tile) or jump into higher tiles (2+ height difference).  All movement restrictions are computed for you, so the MOVE AREA only allows moving into valid tiles.

When you finish moving (press X in the tile you want to move to) the ACTION menu will show what ACTIONS that unit can take in this TURN.  If you END TURN for this unit you won't be able to do any other action.   Press Z or C  from this menu or during movement to cancel your orders on the unit and it will go back to where it was and get released so you can rethink your strategy.

If you select ATTACK or a SPELL a TARGETTING AREA will be displayed (in GREEN) and any potential targets for your action will be selected (use CURSOR keys to rotate through the different targets to pick the one you want) or press Z or C to cancel the action and go back to the menu.

ATTACK and offensive SPELLS  will run a COMBAT round.  Combat is quite simple:  attacker unit "rolls"  a number of "dice" (ATTACK attribute for attacks, and 4 for offensive attacks) and defender will roll a number of "dice" equal to it's DEFENSE.  Any SHIELD in the defense roll will counter one SWORD/FIREBALL/SKULL on the attack roll and the difference (if greater than 0) will reduce the defender HIT POINTS.

Press X on any empty tile to show the TURN menu.  You can find your NEXT UNIT that has not taken action yet or inmediately END TURN .

ARCHERS:  Those fast explorers can shoot their arrows at a distance but are not suited for close combat

HALBERDIERS: Sturdy and with a long reach

WIZARDS: Weak and frail in combat but can throw a powerful FIREBALL (4 dice)

PRIESTS: Not too suited in combat but can HEAL other units (+4 hit points)

NECROMANCER: weak but can MEND (+4 hit poins) other undead

LYCH: a powerful wraiths that can also cast a poisonous MIASMA (4 dice)

First of all I want to apology for the "unfinished" state of things... even considering this was a long jam (16 days) working solo has it's toll.  The gameplay itself is incomplete and can only be played in 2 players mode (no AI implemented for the opposing band) but I think the essence is there and it can be fun enough to play with a friend or even try to beat yourself!

In the TODO list there's just soooo many things, but as I've become quite attached to the project I will keep working on this after the jam is over and potentially move into full PICO-8 resolution of 128x128.

Wishlist for the future (apart from the previous list):

Happy to receive your comments and suggestions on the game. If this goes further I am quite positive it will be in 128x128 mode and some of the look&feel (particularly user UI) will get a full rework to better use space and all

Thank you for playing it!

I will admit to not being familiar with this game type, but I had a lot of trouble figuring out how to proceed in this game. For me at least, having some more detail instructions in the description would be helpful.

Thank you for trying the game and leaving a comment, sorry that you had some trouble figuring out… I will expand on the info the page offers. I hope that at least once you got the way it goes the experience was better.

Done, I hope this new description clarifies the game mechanics. Take into account though this is for now a 2 player only game (no AI) so 2 players (or you can battle yourself!) alternate controlling the two sides

Thanks! I understand it much better now. 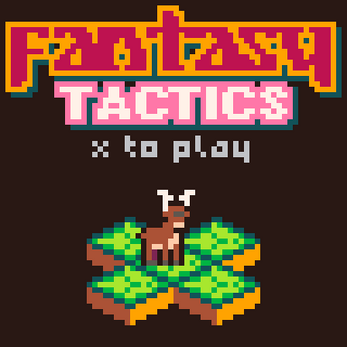